The Three-Chamber test assesses cognition in the form of general sociability and interest in social novelty in rodent models of CNS disorders. Rodents normally prefer to spend more time with another rodent (sociability) and will investigate a novel intruder more so than a familiar one (social novelty). Based on these inclinations, the Three Chamber Test can help identify rodents with deficits in sociability and/or social novelty.

Testing occurs in three sessions within a three-chambered box with openings between the chambers. After habituation to the empty box, the subject encounters a never-before-met intruder under one pencil cup and an empty pencil cup in the “sociability” session. The subject then encounters the first intruder as well as a second never-before-met intruder under another pencil cup in the “social novelty” session. The time spent sniffing each pencil cup, the time spent in each chamber, and the number of entries into each chamber are presented. This test is useful for quantifying deficits in social behavior in transgenic animals exhibiting autistic traits as well as evaluating novel chemical entities for their effect on social behavior. 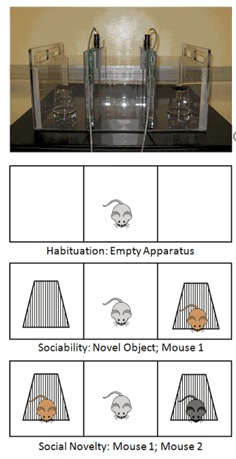 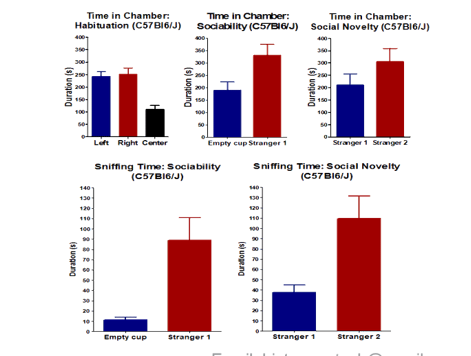