The Tube Dominance test assesses cognition in rodent models of CNS disorders, particularly social dominance through the measurement of aggression. Subjects of different genotypes are released into opposite ends of a clear, narrow tube. The animals interact in the middle of the tube; the more dominant animal will show greater aggression and force its opponent out of the tube. When one animal has all four paws out of the tube, it is declared the loser while the animal remaining inside the tube is the winner, ending the match. The number of wins is reported as a percentage of total number of matches. The Tube Dominance Test is useful for identifying deficits in social interactions in strains of transgenic mice and evaluating novel chemical entities for their effect on cognition and social behavior. 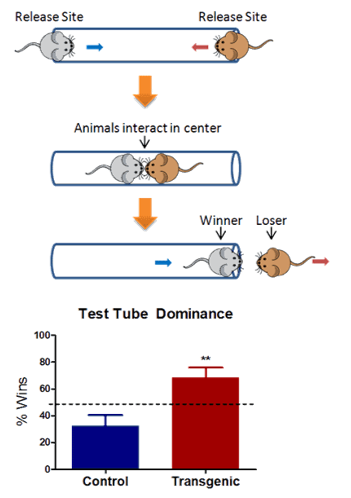